Despite the lingering smoke and the heat, we had a small but enthusiastic group join Father Barnes at Montissippi Park. A beautiful blessing on our bikes followed by a scenic ride through the park was topped off with the sighting of a deer. Our youngest rider, at just 6 years old, completed his longest bike ride of 2.5 miles!

Hello! Heather Bruley and I (Cecilia Kemmetmuller) will be serving with NET Ministries from Mid-August 2021 to May 2022. As missionaries with NET our main goal is to “Challenge young Catholics to love Christ and embrace the life of the Church through youth retreats and parish discipleship”. There are 175 young adults that will be moving across the United States with NET Ministries in groups of 8-14 people to proclaim the Gospel to Catholic youth. For us, this means that we will be leading retreats for young Catholics where we will witness to them and to the Catholic faith through fun games, inspiring talks, and, of course, through prayer.

Over the years, Cecilia and I have been heavily involved with the youth ministry at the Church of Saint Henry and the love this parish has poured out to us is something we wish to pass on to others. This ministry gives us a unique opportunity to do this around the United States by truly being the hands and feet of Christ. The mission of NET however isn’t solely about reaching those we serve on retreats, and isn’t simply run by missionaries such as ourselves. Before missionaries even make it to the NET Center, our goal is to reach out to others and have them join our cause financially and spiritually. To spread the mission of NET and to build support, we are all asked to reach out to our family, friends, and parishes to help us raise around $6,000 of support for ourselves and NET. We ask all to consider joining our mission and praying for the youth we will serve, and the NET missionaries this next year! All donations are accepted and needed to reach our goals! As part of our team, you will receive updates throughout the year from us as we serve thousands of youth and hear how you are making a difference! Thank you all for your generosity, we thank God every day for our St. Henry’s family and can’t wait to start this next chapter with you.

June 17, 2021 The Year of Saint Joseph Click on the image to view the PDF article.

June 11, 2021 Christina's Story: They Story Beyond the Crucifix as told to Tracy Hinkemeyer and Jim Sidla

The next time you visit the chapel at Saint Henry’s, please take notice of the crucifix.  And, if you’ve already seen it, after reading this article, most likely you’ll not see it in the same way ever again.

World War II was in its early stages, and Germany had taken over Poland. Hitler needed people to work in his factories.  One of Saint Henry’s parishioners, Christina Thielen, lived in a small village in Poland at the time, with her mother, father, sister and brother.   One night, by the order of Hitler, their home was raided, and Christina was forced to leave her family home; she had just turned 16 years of age.

“My father and mother were begging them not take me away,” Christina said. “They said we had 10 minutes.  Having no time, my mother gave me her only shoes and coat, and put a prayer card in my pocket.” Hitler’s troops took Christina that night, and this would be the last time she would ever see her family.  They never knew if she had lived or died.

Christina, with many other young women from the area, was trucked from Poland to Germany, where she was forced to live and work in a prison labor camp called Opladen.   There, she worked 12 hours a day making military garments, including parachutes. The factory living quarters were cold and wet, with only straw bedding for sleeping.  Food rations were extremely small.  Their allotment consisted of a piece of bread for three days for breakfast, and they ate from a room-sized kettle of bug-infested vegetables.

“A man with an SS emblem on his uniform was very kind to me”, Christina recalled.  “Somehow God touched his heart and he became a friend.  He gave me extra rations.  But, if anyone knew he was helping me, both of us would have been killed.”

Christina lived in the forced labor camp for four years, and what she witnessed and experienced was horrifying – atrocities we won’t depict here.  With tears in her eyes, Christina said, “I prayed unceasingly. Our Lord brought me through.”

After years of living in the forced labor prison camp, news was spreading that Germany was going to lose the war. By this point, people at the camp were starving and neglected. “We learned we were all going to be poisoned so we couldn’t leave.” Christina said.  “We didn’t eat for fear of this threat.”

After a bloody battle between the Germans and Americans, the Germans were defeated and fled.  “We were just sitting and waiting in the basement, wondering what was going to happen to us,” Christina said.  Fortunately, American troops arrived at the camp and rescued the prisoners. “Many spoke Polish – it was the sweetest thing!” she said.  We hugged, sang and danced.

From there they were trucked to another city in Wetzlar, Germany, to a large camp for displaced persons of the war. The accommodations were not pleasant, with only straw to sleep on, and men and women were camped together.

Soon after, Christina and a friend, Maggie, were successful in applying for and securing a job, serving Polish military personnel at one of their German base camps.  “We had a nice room, rugs on the floor, and a mattress!  I was in charge of the dining room; it was a good job”, she said.  Later this camp moved to Darmstadt, Germany.

During this time, Christina said many had an opportunity to go back to Poland.  However, she reported that she was afraid to go, because, at this point, the Russians had taken over the country, and it was not safe.  Communism was not for her. She had a good job, and was being treated well for the first time.

Beginning of a New Life

One fateful night, Christina met the person who would become her husband.  Richard Thielen (Dick) was an American soldier, stationed near where Christina lived.   “I attended a dance on New Year’s Eve, and that’s where I met Dick,” she said.

Christina reported there was musical instruments, chocolate, and coffee at the dance.  At one point, everyone watched as the door opened and two Americans entered. “One of them walked across the dance floor, grabbed my arm, and didn’t let go!” she said with a laugh. “Dick pursued me every day, and I kept putting him off, until my friends finally said to give him a chance!”  The rest, as they say, is history.  Dick, who is originally from Melrose, MN, and Christina were married 9 months later in Darmshtadt, Germany that year.

Dick and Christina eventually made their home in St. Cloud, MN.  They raised eight children, with the youngest child, Grace Janssen, also a member of Saint Henry’s.

Grace discovered 15 years ago that a fund was set up for survivors of the Polish holocaust by the Polish and German consulate. The funds were set up as reparation for the harm, suffering, and atrocities committed against the prisoners of WWII.  Grace was able to produce all the documentation needed and Christina, as a holocaust survivor, was awarded a small amount of funds from this account.

“When I received this money, I knew I wanted to put it to good use.”

So, when Father Tim Rudolphi, who was the pastor at Saint Henry’s at the time, was looking to raise funds for a new crucifix, Christina was planning to support the fundraising efforts.  “I was going to donate a part of it, but later that night God moved my heart and I thought, ‘OK Lord, let's go for it all.”

Christina went on to say, “When I look at that crucifix, I see Him . . . all the suffering Jesus experienced.  I see myself with Him there.  In the paradox of suffering, sorrow and pain which led to the resurrection and glorious freedom from captivity and death.  What a privilege to be able to donate, as a gift of thanksgiving, this powerful, bittersweet and beautiful crucifix in honor of our Lord and for the people of Saint Henry.

God was always with me during this time, and I want to always be right with Him.” 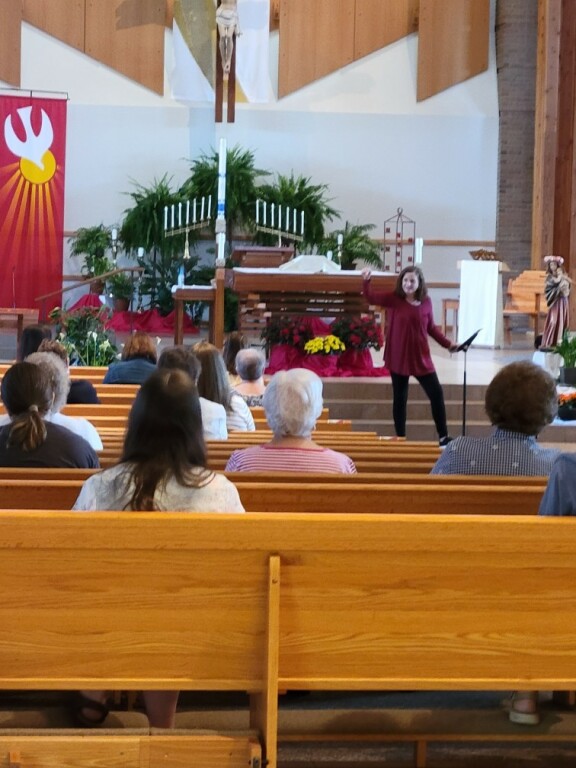 Clarity with Clergy
Last night was a second offering of Clarity with Clergy, held this time in the Gathering Space instead of electronically on Zoom. We had a nice turn out of 15 people. Ten questions were submitted online and were answered by Father and Deacon, as well as several from the attendees. Topics ranged from Purgatory to Christ calling his mother Woman, from forgiveness of sins to music selection and more. Those in attendance agreed that they had each learned something and were glad they attended.
"Purgatory is like a really nice car wash."  -Father Barnes 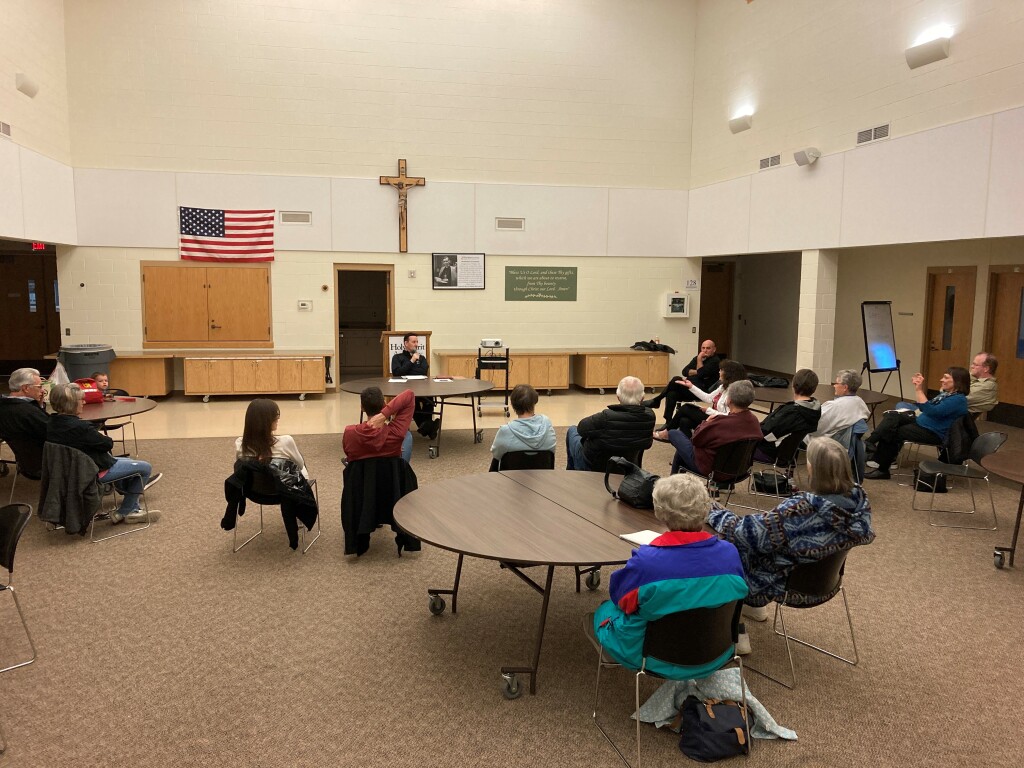 The Month of May Honoring Mother Mary

As Catholics, we have honored Mary, mother of Jesus, during the month of May since the 13th century.  Traditions have included praying the rosary each day, a “crowning” of Mary event, and special readings, devotions, and prayers.

Here are few ways we invite you to celebrate Mary’s special month:

Suggestions of places to purchase your very own statue of Mary. 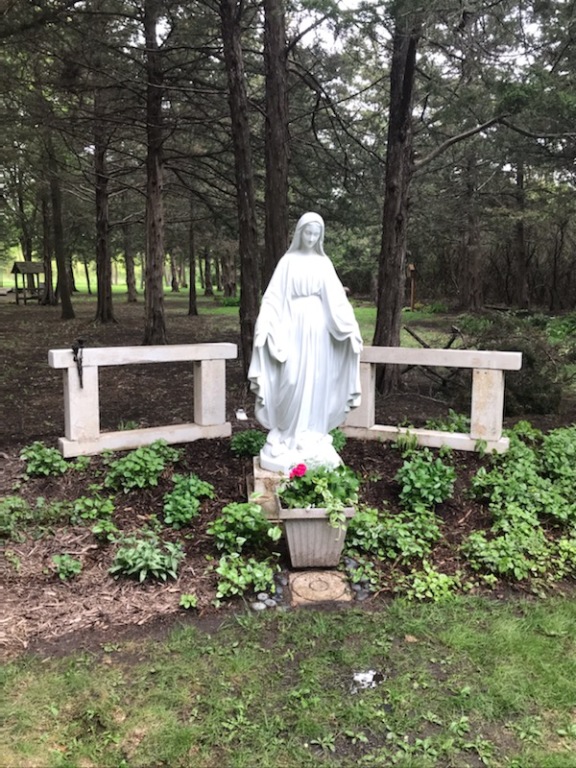 Click on the links below to view past newsletters.